The latest incarnation of a former savings and loan building represents an amazing transformation from one of the downtown area’s most imposing commercial properties to a beautifully appointed mixed-use development that includes professional office space and high-en residential quarters.

The building’s main lobby (see ‘before’ photos) was divided into two different areas with a set of interior doors. The front half was dark with the walls covered in a wood paneling wainscot and a low sheetrock ceiling.  In the back half of the space the walls were partially covered with a marble wainscot measuring 4 feet in height, the ceiling was a drop-in grid with 2×4 acoustical tiles, and the elevator doors were painted teal green. 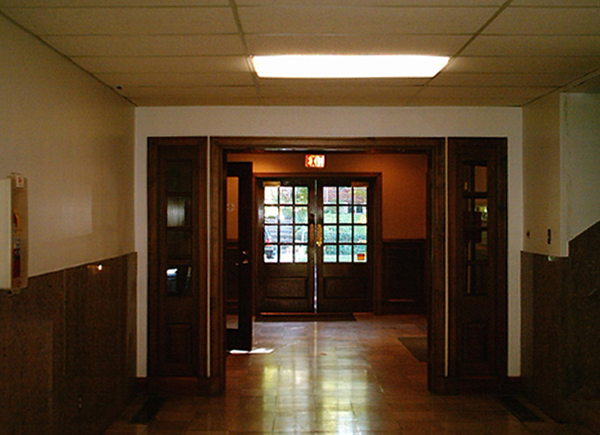 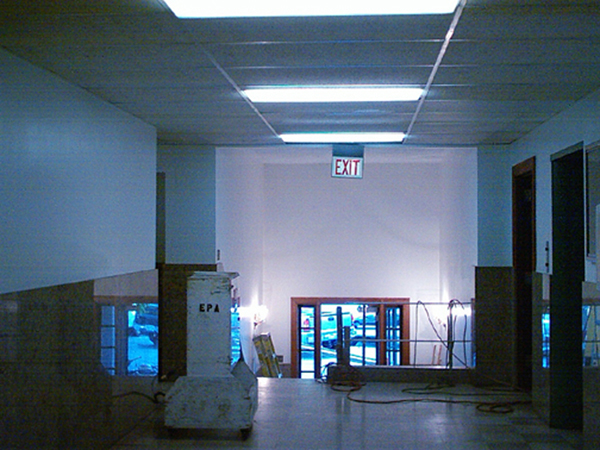 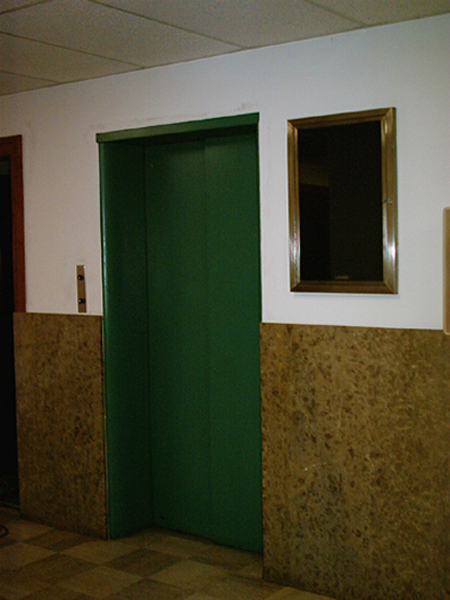 Our firm was hired to provide space planning, interior architecture and interior design for this entire project along with the donation of time serving as the project chair for this biennial fundraising event. We started at the beginning stages before the demolition began. The client wanted to take this 1960’s building and transform it into five private luxury condominiums and a new professional office space with rich, Old World charm.

Photo of the lobby as the work began: 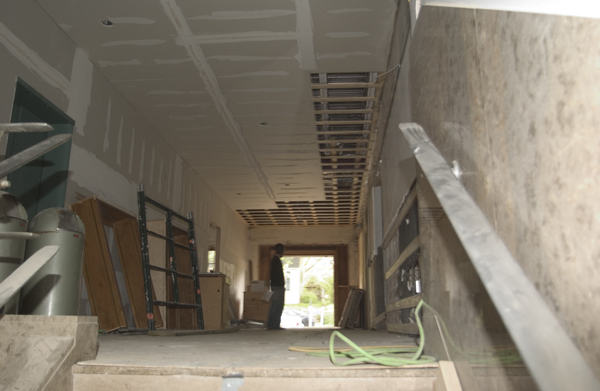 The desired look for the renovation was to create an upscale hotel-like lobby. We proposed to remove the ceiling and raise it as high as possible and create four equally sized coffered sections. Another 8 inches below the crown, a light cove creates a warm glow to the interior of the lobby space. Hanging in the center of each coffer is a rich alabaster light fixture, delivering an added radiance to this environment.

Next we proposed cutting the existing marble wainscot in half and adding a hefty base and chair rail so as to extend the full length of the lobby. Painting the walls a soft, rich taupe with the trim a lighter tone of this same taupe and staining all the doors a rich, walnut color, the desired look began to take shape. The existing travertine tile flooring remained but was refurbished. The furnishings were kept to a minimum to showcase the rich use of materials, finishes and colors. 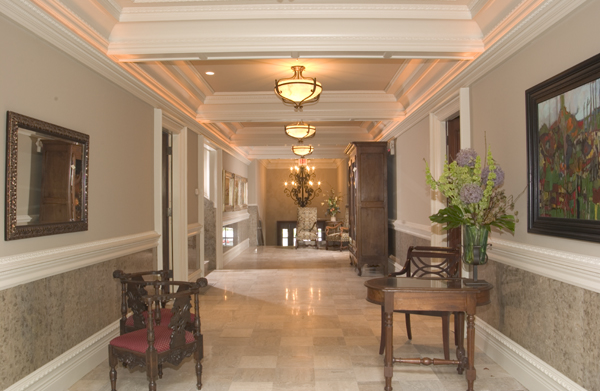 The building’s exterior had a skin of red brick and featured huge white columns. We recommended painting the brick as well as the columns to fit the new look of the building. 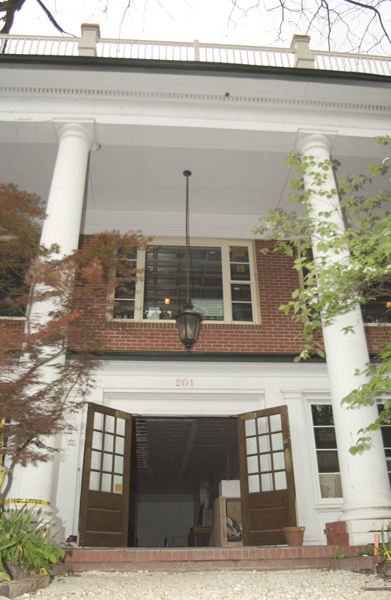 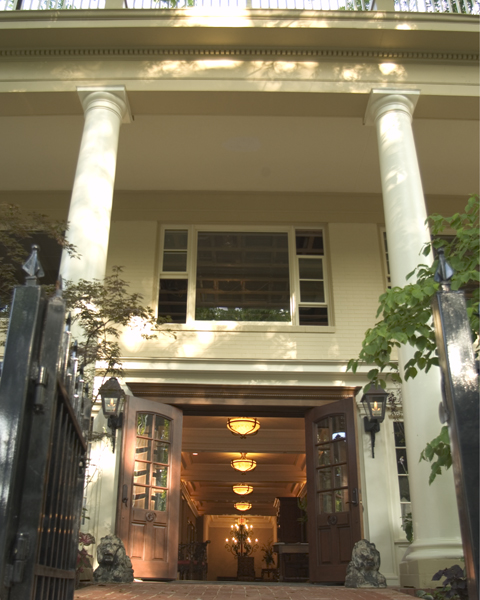 The basement level was dark and closed-in with 7-foot ceilings and a ward of private offices (see ‘before’ photos).  We removed the ceiling and gutted the entire level (see attached new space plan of this area) for use by the owner, to house his private practice – the only commercial tenant in the building. 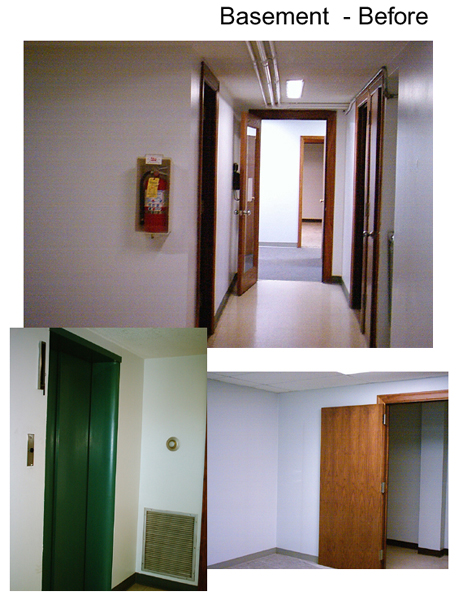 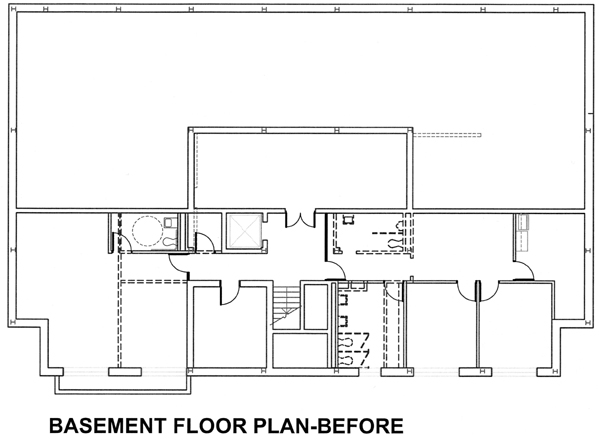 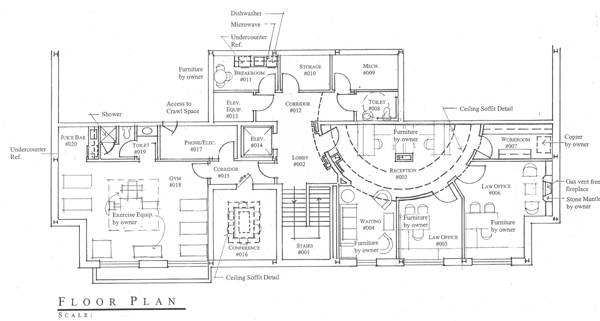 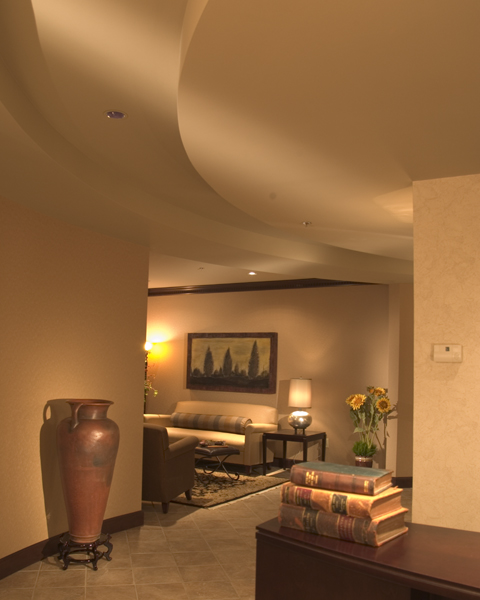 We curved the wall into the client’s main reception/waiting area and reused salvaged half-fluted columns and broken pediment over his entry and stained all a rich espresso color. The finished product provides a sophisticated and professional look while retaining the Old World charm of a well-established business.

Here is the Entry during the renovation: 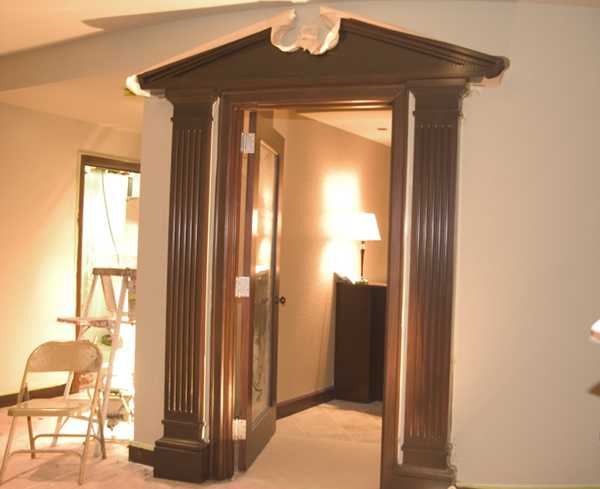 The old concrete-box bank vault was turned into the office’s conference room, and next to it former smaller office spaces were turned into a gym for all the tenants of the building to use. 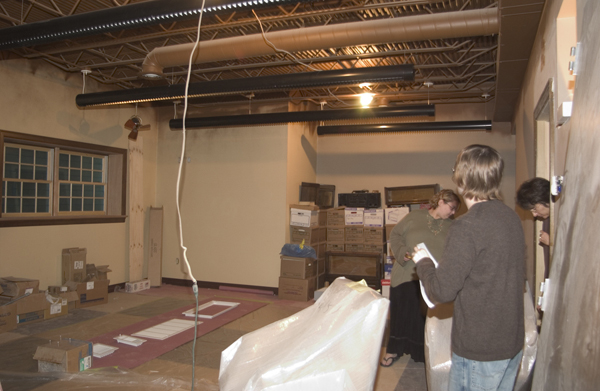 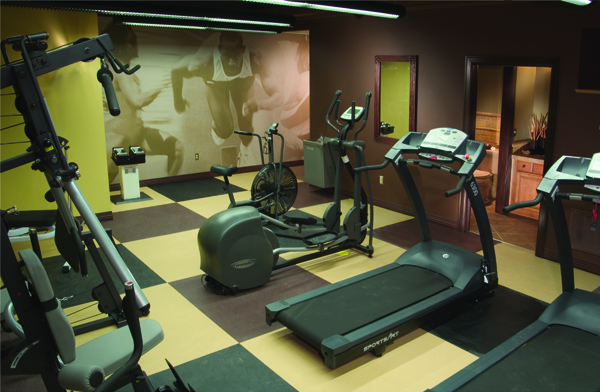